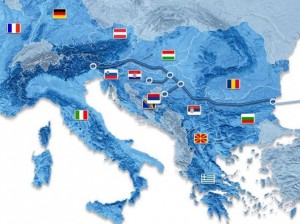 The Ukraine crisis has once again trumpeted European vulnerability brought by over-dependence on Russian gas. Russian aggression, added to its gas supply posturing and actions more akin to blackmail than trade, demonstrate that it cannot be considered a reliable partner in developing mutual energy security. Indeed, at their meeting in late March 2014, European leaders concluded that efforts to reduce Europe’s high gas energy dependency rates should be intensified and asked the European Commission to propose by this June a comprehensive plan for growing EU energy independence. Yet already running along Russia’s soft underbelly is one of Europe’s best options for natural gas diversification: the Southern Corridor.

The corridor is a series of already operating, planned, and prospective pipelines stretching from the natural gas and oil-rich Caspian Sea to European and global markets. From production to distribution, the commercial projects that comprise the Southern Corridor bring stunning strategic benefits for the United States and Europe already in its current form. Its first planned major extension to continental Europe will supply only about two percent of the EU’s gas consumption from 2019, hardly a silver bullet in supply diversification. With modest extra efforts though, the corridor could become a truly vital part of Europe’s gas diversification strategy.

The second phase of the Southern Corridor will directly connect markets in continental Europe with Caspian basin gas without depending on Russia for transit. Just last December, a final investment decision was made to develop the next phase of Azerbaijan’s offshore Shah Deniz fields, gas from which is slated to transit the planned Trans-Anatolian Pipeline (TANAP) then link to planned Trans-Adriatic Pipeline (TAP) stretching from Turkey, through Greece and Albania to Italy. Once completed, this $45 billion system will deliver welcome supply diversification to certain European markets on more accessible commercial terms, and it will consolidate strategic benefits reached in the Southern Corridor’s first phase.

However, TAP will not deliver gas to those countries most vulnerable to Russian manipulation of gas prices and supplies. In light of the Ukraine-crisis and rapidly deteriorating relations with Russia, the unwillingness of the EU, the United States, and individual states along the pipeline route to act in unison to achieve success in the Nabucco concept that would have delivered gas to particularly vulnerable states was a strategic mistake. The challenge now is to reinforce the Corridor’s role as a major avenue for alternative supplies.

Doing so will necessitate including new feeder gas lines and interconnections to better integrate the Central and Southeast European region, including stemming from TAP. The corridor should also be expanded to include more source countries. With the decades-long diplomatic slog it took to get the Southern Corridor to this point, it is no surprise that Washington and Brussels are wary of tackling the daunting geopolitical challenges to bring gas from Turkmenistan, Iraq, Eastern Mediterranean, and, conditional on dismantling their nuclear weapons program and support for terrorist groups, perhaps even Iranian resources. Yet, this moment of crisis emanating from Ukraine calls for a diplomatic push to resolve the underlying issues to facilitate gas supplies to Europe.

Azerbaijan, which took a bold decision to assert its independence against Russian energy domination, remains the linchpin for bringing in new sources from new countries. Guarantee of access to transport infrastructure for additional gas sources sourced across the Caspian or entering TANAP, which Azerbaijan is majority owner in, is essential for building confidence of other possible supply countries and companies. Likewise, Turkey should build confidence through third party access guarantees in line with the European Energy Community. Efficiencies in expanding TANAP capacity will be found with acting expeditiously.

While the Ukraine crisis continues, it is clear that both the scope and nature of Russia’s relations with the European Union and the United States is dramatically changing. The Southern Corridor cannot replace all gas coming from Russia even in an expanded form, but its gas will inject competition into all European gas markets that will blunt Russia’s energy weapon. The EU and the United States should make every effort to ensure its realization.

David Koranyi is the acting director of the Dinu Patriciu Eurasia Center of the Atlantic Council. Neil Brown is nonresident fellow at the German Marshall Fund.