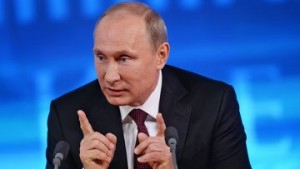 Europe will not be able to refuse of the Russian gas deliveries, because it will be to the detriment to its own economic interests, said Russian President Vladimir Putin.

“The European countries cover 34-35% of their gas balance with the deliveries from Russia. Can we completely stop Russian gas purchases? I believe this is impossible,” Russian President Vladimir Putin said in his direct dialogue with the Russian citizens.

Vladimir Putin cited an instance of its neighbor Finland, which receives 90% of gas from Russia and some Eastern European countries receive 60-70% of gas from Russia. “Can the deliveries from Russia be completely stopped? I believe this is unreal. This will be to the detriment of those countries and I cannot imagine that,” concluded Russian President.

Last week Russian President sent messages to Presidents of Eastern and Western Europe, because of Ukraine’s gas debt. In particular, Putin wrote that during the past four years Russia subsidized $35.4 billion to Ukraine by reduction of gas prices and offered to have immediate consultations at the level of Ministries to work out the coordinate actions to stabilize Ukraine’s economy and ensure Russian gas transit in accordance with the contract.