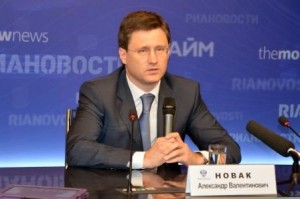 It will be hard for Europe to refuse of the Russian energy resources, Russian Minister of Energy Alexander Novak said in his interview to Russia 24 TV channel.

“You know that of total volume of oil imported by the European Union, which makes about 475 million tons, 200 million tons is supplied by Russia. This means that at present dependence constitutes about 40%,” Minister specified.

He reminded that reduction of energy dependence on Russia in the future has been earlier announced. “EU and US have been working on that. US said it is going to increase LNG deliveries. These statements have not been economically confirmed,” Minister said.

However, many European oil refineries have been built to consume Russian Urals oil, Novak reminded. “Huge investments will be needed to re-orient the oil refineries for another type of oil,” he said.

Minister said that today the market is balanced and any actions would cause imbalance in the oil and gas market and the consequences could be economically unpredictable for those who have initiated the sanctions.

He said “it would be difficult to refuse of Russian gas and Russian oil.” Many European companies operating at the market are strongly opposed to application of any sanctions,” he conclude.