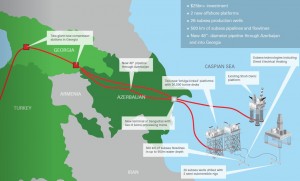 The Shah Deniz consortium is pleased to announce a major offshore transport and installation contract award for the Stage 2 development of the Shah Deniz field to the BOS Shelf LLC, Saipem Contracting Netherlands B.V. and Star Gulf FZCO consortium.

The award of this $1.8 billion contract, part of the Shah Deniz Stage 2 and South Caucasus Pipeline Expansion (SCPX) projects, underlines the tremendous progress made across all areas since the final investment decision last December.

The scope of work of this contract includes the offshore transport and installation of both jackets and topside units, subsea production systems and subsea structures. It also includes the laying of over 360 kilometres of subsea pipelines, diving support services, the upgrade of three installation vessels – the pipelay barge “Israfil Huseynov”, the diving support vessel “Tofiq Ismayilov” and the derrick barge “Azerbaijan”. The work is expected to be completed by the end of 2017.

Mr Gordon Birrell, BP’s Regional President for Azerbaijan, Georgia and Turkey, commented: “This is a huge contract award and it marks a major milestone for this historic project.   This is the 13th major contract since the final investment decision. In total some $7 billion worth of supply and service work will be mainly performed within Azerbaijan.

“We are pleased that both Stage 2 and SCPX projects are making very good progress across all areas of this giant gas development and export project.  They are moving forward at pace and activities have already commenced at all fabrication and construction sites near Baku.  All these tremendous efforts and activities underpin our plans to begin first gas exports in late 2018.”

Today’s announcement follows the signing of a $378 million contract by Shah Deniz with Baku Shipyard on April 23 to design and build a subsea construction vessel (SCV). The SCV will be a new flagship vessel for the Caspian and will be used for the Stage 2 project subsea installation activities for over eleven years between 2017 and 2027.

The vessel will be delivered in April 2017.  Baku Shipyard is a joint venture comprised of SOCAR, the Azerbaijan Investment Company and Keppel O&M.