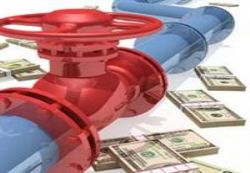 On April 10, 2014 Azerbaijani President Ilham Aliyev signed a decree to introduce amendments into the budget of the State Oil Fund of Azerbaijan (SOFAZ) for fiscal year 2014.

In the SOFAZ budget for fiscal year 2014 the second biggest item of expenses after transfers to the state budget was “funding of Azerbaijan’s state share in the trans-Anadolu (TANAP) project) – 800 million AZN.

Azerbaijani President has changed this item of expenses and reduced funding of TANAP this year by 20 times.

The changes in the items of expenses are connected with President’s decree on the measures to implement the Shah-Deniz-2 project and create the Southern Gas Corridor. President has earlier issued a decree to establish a closed-type joint stock company (JSC) (51% owned by the state and 49% by SOCAR) to manage the state assets in the Shah-Deniz-2, TANAP, TAP and expansion of the South Caucasian pipeline (SCP). It was planned to allocate 40.1 million AZN from the Oil Fund for this purpose this year.