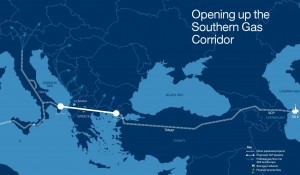 Europe is ready to invest almost 6 billion Euro into construction of the pipelines to purchase raw material from Azerbaijan, Turkmenistan and Iran.

European Union is going to prolong the route of gas deliveries from Azerbaijan to its destination on the south of Italy via the Southern Gas Corridor, representation of the European Commission told Vedomosti.

The program of the gas pipeline construction, including the one between Spain and France, which also hope to receive Caspian gas, for the period between 2014 and 2020 has been approved. A special fund worth 5.8 billion Euro has been created for that. This will allow Europe increasing gas deliveries from Azerbaijan and starting export from Turkmenistan and Iran (in case if sanctions are lifted), he added.

Azerbaijani gas in Europe will not become a serious alternative to the Russian gas. Azerbaijan does not have enormous resources and cost price of production is high, say Russian experts. Gas is cheaper in Turkmenistan and Iran. A lot depends on Russia and its actions, which will either continue urging Europe looking for an alternative, or will restrain this process.