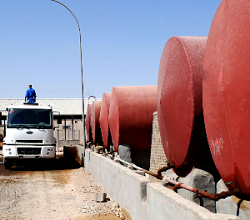 The growth of prices for oil products in Azerbaijan in December 2013 has affected the market behavior.

Table of oil products deliveries to the local market (in thousand tons):

The reason of petrol consumption decline is that after rise in this type of fuel by 32% many state and private agencies strictly control use of fuel by the drivers. In addition, some companies, including state ones, have reduced number of their cars to minimum.