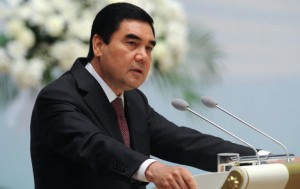 President of Turkmenistan, Gurbanguly Berdimuhamedov issued a number of instructions regarding the accelerated industrial development of highly promising fields of the country, stepwise increase of export volumes of Turkmen ‘blue fuel’ through Turkmenistan -China pipeline, a message from the country’s government said on March 15.

The report on the construction of the second gas processing plant in the Bagtyyarlyk contract territory which serves as a resource base of this interstate pipeline, was heard at the meeting of the Cabinet of Ministers of Turkmenistan, according to the message from the Turkmen government.

China National Petroleum Corporation (CNPC) carries out the development of Bagtyyarlyk in accordance to the Production Sharing Agreement signed with the State Agency for Management and Use of Hydrocarbon Resources under the President of Turkmenistan.

Gas supply from Turkmenistan to China began in 2009, and three branches (“A”, “B”, “C”) of Turkmen-Chinese gas pipeline run through the territory of Uzbekistan and Kazakhstan.

Tajiktransgas company signed an agreement on laying fourth branch (“D”) of Turkmen gas pipeline to China, which will run through Uzbekistan, Tajikistan and Kyrgyzstan, CNPC said this week.

An agreement signed in September 2013 during the negotiations between President Gurbanguly Berdimuhamedov and Chinese President Xi Jinping, who was on a state visit to Turkmenistan, became the starting point for the new route.

Later, this initiative was supported by the transit countries.

By 2020, when all four branches of the gas pipeline and component facilities in China must be completed, the annual supply of natural gas from Central Asia to China will hit 80 billion cubic meters and will account for over 40 percent of the total imports of this type of energy in the country, Xinhua said.