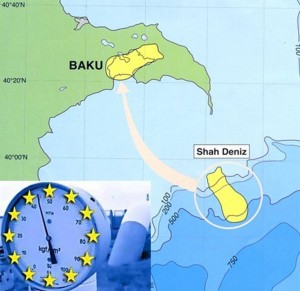 Beneath the din of the Western furor over the Russian annexation of Crimea, BP announced it awarded more than $800 million in contracts for the development of the Shah Deniz II gas field offshore Azerbaijan. With first gas expected for Europe in a little less than four years, the development suggests much of the regional concerns over energy security may be overstated.

The BP-led consortium announced a series of multi-million dollar contracts ranging from pipeline engineering to equipment for offshore living quarters for the development of Shah Deniz II and the South Caucasus Pipeline Expansion projects.

At a 2009 summit for the project in Prague, European Commission President Manuel Barroso said the “building blocks” for regional energy security and economic stimulus are to be found in the Southern Corridor. That same year, Russian energy company Gazprom cut gas supplies through Ukraine because of contractual disputes, exposing a chink in the European Union’s energy armor.

Last week, Russian President Vladimir Putin signed the final legal measures necessary to complete the annexation of Crimea, a peninsula to Ukraine’s south in the Black Sea. The annexation is ostensibly the Kremlin’s response to losing Ukraine to the European Union, though the move has sent shivers through the European energy sector.

The International Energy Agency said March 5 there had been no physical disruption of crude oil or natural gas through Ukraine, however. Ukraine is the largest transport corridor of Russian gas to Europe, hosting about half of the 167.2 billion cubic meters of gas sent from Russia to Europe last year. That percentage, however, is down from the 64.9 percent sent through Ukraine in 2010, the year after the latest gas row.

From sources other than Russia, meanwhile, IEA reports gas imports into the European Union from suppliers like Azerbaijan increased more than 5 percent since 2010. While some of the decrease from Russia may be attributed to the poor state of the European economy, IEA’s figures show a steady diversification of the European energy sector.

European consumers should get about 10 billion cubic meters of natural gas from the Shah Deniz II project before 2019.  The first stage has been pumping around 10 billion cubic meters since 2006 and a third stage should deliver even more by 2025. Russia had planned to circumvent Ukraine with its South Stream natural gas pipeline, though Italian energy company Eni, a stakeholder in the project, said the row over Ukraine made it a “gloomy” prospect.

Before the Ukrainian crisis erupted in November, Russia had said it was looking for new deals in Asia, where demand for natural gas is great. U.S. policymakers, for their part, have said the glut of natural gas at home could help alleviate the crisis, though that’s largely just rhetoric. In an interview with German broadcaster Deutsche Welle, meanwhile, EU Energy Commissioner Günter Oettinger said much of the crisis was overblown.

By Daniel J. Graeber of Oilprice.com