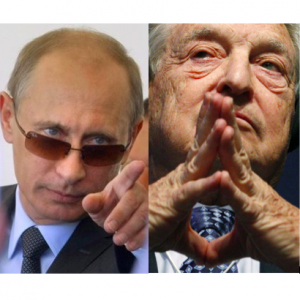 George Soros said that Russian President Vladimir Putin is annexing part of Ukraine “out of weakness” and punishing Russia may lead him to retaliate like a “wounded animal.”

While Putin is seeking to prop up flagging support at home by claiming Crimea, the crisis is a chance for German Chancellor Angela Merkel “to emerge as the leader of a united Europe, not just a chancellor preoccupied with the national interests of Germany,” Soros said during a panel discussion in Berlin.

“She’s more of a European leader” already, the billionaire investor and chairman of the Open Society Institute said. “She’s taken a greater risk in leading German public opinion than she has ever done before.”

Merkel has resisted calls by German business to avoid any sanctions on Russia as polls suggest the German public also doesn’t want to risk worsening relations. The chancellor speaks Russian from growing up in communist East Germany, while Putin knows German from his time as a KGB spy in the same country.

The U.S. holds the key to the “strongest sanction” because it could open its Strategic Oil Reserve, flood markets and depress crude prices, Soros said. Russia needs oil prices at $100 per barrel or more “to balance the budget,” he said.

Even so, “the task is to help Ukraine rather than just punishing Russia,” Soros said. “Just punishing Russia will push Putin further into a corner and as a wounded animal he would strike back and it would be a lose-lose proposition.”

Putin is using energy, including the North Stream and planned South Stream pipelines, to advance his strategic goals and Europe should reduce energy dependence on Russia, former German Foreign Minister Joschka Fischer said on the panel.

“The present Russian leadership wants to restore the Russian empire,” he said.