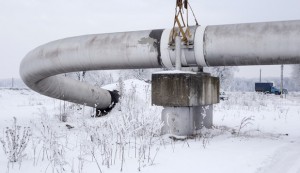 Russia’s importance as a supplier of natural gas to Europe may look like an asset for Moscow, as demonstrated by Europe’s inaction over Russia’s occupation of Crimea. Over the long term, however, that relationship could become a significant liability, and one that Europe can try to exploit.

In 2013, Russia sent 162 billion cubic meters of natural gas to European countries outside the former Soviet Union — about 30 percent of Europe’s total consumption. That makes many leaders in Europe sensitive to changes in Russia’s willingness to cut the supply of natural gas. Over short periods, Russia’s ability to turn off the gas is indeed a formidable weapon.

But Russia is much more dependent on European consumers than the other way around. It sends west almost all the natural gas it doesn’t use for itself. Oil and gas revenues paid for more than half of Russian government spending last year, a vulnerability that can be exploited if Europe is committed to restraining Russian adventurism. Ordinary Russians might even benefit in the long run if their economy is nudged to rebalance away from commodity extraction.

The question is whether European consumers are willing to bear the costs. Europeans have three options, although only two of them make much sense:

Replace imports of Russian natural gas with supplies from elsewhere.

Build a stockpile of natural gas that could be distributed to any state endangered by the possibility of Russian supply cuts.

Some of Europe’s natural gas comes from domestic sources, but most is imported from pipelines stretching north into Norway, east into Russia and south into Algeria. About 20 percent comes in on ships, mainly from the Persian Gulf. Many importers have made long-term bilateral deals with Russia to guarantee their supplies at fixed prices.

In theory, new pipelines to the Middle East and Central Asia, as well as increased imports of liquefied natural gas on ships, could free Europeans from the need to buy their gas through Russia. That’s already happening; existing LNG terminals and new ones under construction should be able to handle about 44 percent more gas than they do now, for example. But these projects take a long time.

Besides, boycotting Russian natural gas would probably increase prices for European consumers, even if the U.S. lifted its export restrictions. Right now, gas prices vary widely across the world based in part on the ease of transporting it. The spot price of natural gas in Japan, which is almost all imported on ships after being liquefied, is more than twice as expensive as the spot price of natural gas in the U.S., much of which is moved around in pipelines from domestic fields. Current European prices are somewhere in the middle, but attempting to replace a third of its supply with liquefied imports won’t be cheap.

It’s also unclear how a boycott would actually affect Russia’s export earnings. While unused pipelines would hurt profit margins, that could be offset by an increase in sales of liquefied natural gas exported to Asia at higher prices. It would be inconvenient at first, but not necessarily that damaging to Russia.

The better and quicker options for Europe are reducing its demand for gas and stockpiling transportable emergency supplies to limit Russia’s ability to turn off the heat during the winter.

Contrary to what you may have heard,European shale gas probably won’t be one of them.) One European source estimates that existing buildings could reduce heating demand by as much as 50 percent through proper retrofitting, while new buildings could cut heating needs by up to 95 percent compared to existing structures.

A model for alternative energy sources is France, which gets about three-quarters of its electric power from nuclear plants and consumed 41 percent less natural gas than Italy last year despite its similar population size and a cooler climate. (Germany has gone the other way, pledging to shut down all of its nuclear power plants by 2022. Since 2011, it has decommissioned eight of its plants, leaving only nine operational and leading to greater use of coal.)

More solar power and wind power would also be helpful, although they may require large subsidies. One way to get public support for the taxes those subsidies would require could be to explicitly tie those taxes to reducing Russian influence in European affairs.

Most European countries can’t wean themselves off Russian natural gas overnight. But if they want to penalize Russian adventurism, natural gas is as much a weapon as a weakness.