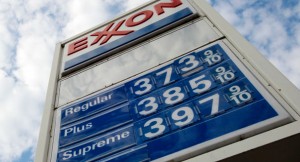 The standoff between the United States and Russia isn’t getting in the way of ExxonMobil’s lucrative relationship with Vladimir Putin’s regime. At least not yet.

The U.S.-based oil and gas giant has spent years cultivating ties with the Kremlin, reaching a multibillion-dollar exploration deal with state oil company Rosneft in 2011. Putin even awarded Exxon CEO Rex Tillerson the Order of Friendship, one of the Russia’s highest honors, for the company’s “big contribution to developing cooperation in the energy sector.”

But Russia’s invasion of Ukraine’s Crimea region could complicate Exxon’s work in the country, especially if the United States imposes strict sanctions.

“As BP learned in the last decade, investing in Russian oil production means exposing your investment to largely unforeseeable risks,” said Paul Bledsoe, a senior fellow on energy and society at the German Marshall Fund. “While Exxon may have factored in the possibility of an embargo of Russian oil exports to their investment, they almost certainly assigned it a low probability, and now could pay a price in lower production.”

“There has been no – I mean to this point, the current situation obviously is early days — no impact on any of our plans or activities at this point,” Tillerson said during a March 5 analyst meeting. “Nor would we expect there to be any, barring governments taking steps that are beyond our control.”

Richard Keil, an Exxon spokesman, echoed Tillerson’s comments this week. “The current situation is having no impact on our business,” he said.

The Senate Foreign Relations Committee is set to consider a Ukrainian aid and sanctions package Wednesday, but the scope of the sanctions was unclear as of Tuesday evening. The House passed a more narrow bill last week to provide loan guarantees to the new Ukrainian government, and the White House released an executive order last week that lays the groundwork for visa restrictions and sanctions targeting Ukrainian and Russian nationals who are deemed responsible for the crisis.

Asked if the U.S. is open to pursuing sanctions that would restrict American companies from doing business in Russia, a senior administration official offered few details Tuesday night. “As we have said, we are prepared to consider further measures if necessary, but we don’t have any additional steps to announce today,” the official said. “Generally speaking, we carefully assess numerous factors before expanding U.S. sanctions, including the impact on the U.S. economy and U.S. companies.”

So far, none of the measures being publicly discussed would pose a major threat to Exxon’s operations in Russia. Leaders in the U.S. have given no indications that they are willing to impose sanctions on Russia comparable to those they have imposed for countries like Iran, which prohibit doing business with a hostile regime.

“There is really not much concrete that anyone can say about this because the extent of U.S. sanctions are still unclear,” said Matthew Sagers, senior director for Russia and Caspian Energy at the firm IHS CERA.

Sanctions limiting the ability of U.S. companies to do business in Russia, for example, would throw a massive wrench in Exxon’s drilling plans.

But Elizabeth Rosenberg, a former Treasury Department official who helped develop and implement sanctions on Iran, said such strict sanctions would be an “incredibly aggressive step.”

“If extraordinary circumstances merit extraordinary actions we could see some really tough sanctions imposed by Europe and the United States, but there are a variety of lesser steps that could be taken,” said Rosenberg, who is now the director of the Center for a New American Security’s energy, environment and security program.

The more modest measures include restrictions on the banking sector and limits on Russian officials’ ability to get visas allowing access into the United States.

Even if the U.S. imposes more severe sanctions, there is “some precedent to tailoring sanctions in a careful way so as to try and help keep certain companies out of harm’s way,” Rosenberg said.

European Union sanctions on Iran, for example, exempted the Shah Deniz natural gas field in Azerbaijan, which is operated by a consortium of companies including a subsidiary of the government-owned National Iranian Oil Co. The field was seen as important for weaning Europe off its reliance on Russian gas.

Meanwhile, Exxon’s deal with Rosneft has put Tillerson in the Kremlin’s good graces.

During a June 2012 meeting with Tillerson about the Rosneft deal, Putin touted the “increasingly close relations” between Exxon and Russia, while Tillerson said the agreement “will serve to strengthen our relationship between our two countries and obviously our two companies.”

The August 2011 Rosneft-Exxon “strategic cooperation agreement” and subsequent expansions of the deal paved the way for the companies to explore for and produce oil in western Siberia and Russia’s Arctic.

Though they remain committed to their projects in Russia, Exxon executives said last week that they are putting on hold a natural gas project in the Black Sea near Ukraine amid tension in the country.

“Obviously, ExxonMobil made a strategic decision that its business interests in Russia were far more important than its project in Ukraine,” Sagers said.
Politici.com