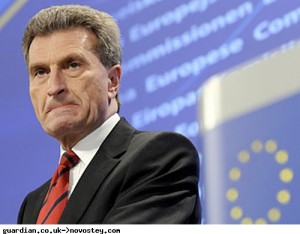 The EU Energy Commissar Gunther Oettinger supported introduction of sanctions against Russia, because of the referendum in Crimea. He said separation of the Crimea from Ukraine is impossible without consent of the Ukrainian parliament.

Gunther Oettinger believes that the European Union’s intention to introduce sanctions against Russia is justified. “If we exclude use of the army to protect Ukraine, then the economic sanctions is the most efficient and almost the only possibility to affect formation of public opinion in Moscow,” he said in his interview to Deutschlandfunk radio station on March 16.

Oettinger reminded that the consultations on the new sanctions against Russia will be conducted in Brussels on March 17, 2014. “We plan to ban issuance of visa to Russian politicians and manufacturers. Nobody should think that the European Union is not going to express its opinion,” the European Commissar added. He also said that they are not going to break all economic ties with Russia, but said that Russia “is more dependent on the European markets, than Europe is dependent on the Russian market.”

Oettinger also mentioned that according to the Ukrainian Constitution, separation of the  Crimea from Ukraine “is impossible without consent of the national parliament.” Europeans should made it clear that nobody is going to pretend that nothing happened, when the international law is violated, http://www.dw.de quoted his as saying.