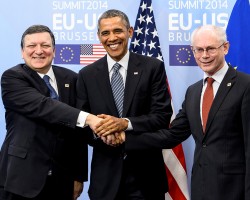 US President Barack Obama said at a press conference after the US-EU summit in Brussels that the US authorities are ready to allow gas export to Europe.

“We are ready to allow export of the amount of gas that Europe consumes daily,” he said. US President added that US gas is delivered to the open market now and it is sold by the private companies. The US “would like to find agreement on verification of this process at a high level through the Energy Ministers,” President Obama said.

USA and EU will discuss reduction of energy dependence on Russia in details next week.

According to the Ukrainian government’s estimates, EU could deliver 25 billion cub.m. of gas a year to Ukraine. Its price will be $100 per 1000 cub.m., which is lower than Russian gas, RBC-Ukraine correspondent quote Ukrainian Premier Arsenii Yazenyuk as saying at a briefing. The Premier did not disclose the sources of gas import.

The experts have earlier repeatedly said that intensification of tension between Russia and the West could lead to expansion of natural gas export from the US. The gas partnership between Russia and Europe could collapse at once, but the Ukrainian crisis has again brought up the issue of energy dependence of the EU on Russia, said top manager of French Total company Philipp Socket.

The experts claim that the western European market consumes 76% of Russian natural gas. In 2012 70% of the Russian export fell to oil and gas and in the same year 52% of the Russian budget was formed of the incomes from hydrocarbon export, according to the PFC Energy, International Monetary Fund (IMF) and the US Energy Information Agency (EIA).

Clayland Boyden Gray, representative of the US Department of States for Energy under President George Bush Senior, said that the current geopolitical crisis could encourage Europe to build the pipelines from the gas-rich countries such as Turkmenistan or Israel. Other experts believe that the Ukrainian crisis could help developing the proposed project to deliver gas from the Azerbaijani Shah-Deniz field in the Caspian Sea via Turkey and Greece to Europe.

The Crimean crisis has also intensified the appeals to the US Congress to allow LNG export to more countries, than it is currently stipulated by the US legislation.  The experts believe that gas will reach Europe in several years: construction of the first of six approved LNG terminals will start no earlier than end of 2015 and its capacities have been already booked by the clients from Asia.