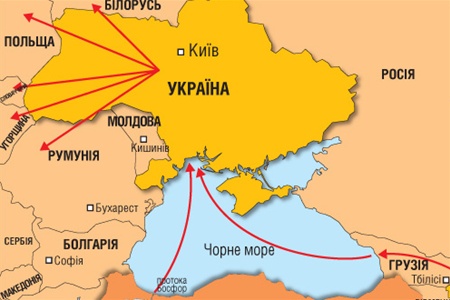 Ukraine continues searching for the possibilities for diversification of gas deliveries. The State Land Agency has granted permission for the land plot for construction of the liquefied fuel terminal near Yuzhnii port in Odessa. It should be built within a short period of time, because Russian gas will be discounted for a short time, said the Ukrainian Energy Ministry. This method of gas delivery is not the most efficient right now, writes UAenergy.

Press office of the Odessa-based State Land Agency said that it has granted permission to the state enterprise “National project LNG-Terminal” to implement the project on a certain land plot. 13.5 hectares of land of Sychav rural area in Komintern region near Yuzhnii port  will be provided for the terminal construction.

Till now the project has faced serious difficulties. Last year two credits worth 221.9 million Euro were not allotted for the project. Former Ukrainian Prime Minister Nikolai Azarov said earlier that the idea to buy Azerbaijani gas and deliver it to Ukraine via LNG-terminal is unfeasible.

A source from the Ukrainian Energy Ministry told “Ъ” yesterday that it was decided to return to the project, because Russia refuses to sign a long-term contract on gas price discount. “As import of liquefied gas via Bosporus is completed, our main hope today is to purchase gas in Azerbaijan and transport it via the Black Sea,” he specified. The same source added that in the near future Ukraine will resume talks about that with Azerbaijan. The received gas could be used by all chemical plants, a source from the Ukrainian Energy Ministry told http:/rusenergy.com.