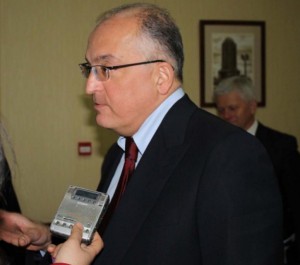 He reminded that on 17 December 2013, the final investment decision on the second phase of development of the Shah Deniz gas condensate field in the Azerbaijani sector of the Caspian Sea was adopted in Baku. “It was a very responsible and very tough decision for all participants of the consortium, not only the Shah Deniz but the consortium of TANAP, Trans Adriatic Pipeline and the South Caucasus Pipeline since the investment volumes are huge and we have a lot of things to do in front of us in order to provide everything in parallel and complete the construction of three different pipeline sections and the production of gas and deliver the gas to European and Turkish buyers in the agreed time slots,” Nassirov said, speaking by phone from Baku.

Regarding key lenders, he said that each company is considering its own financing institutions so it will be completed in several months.

Asked whether supplying gas to the Balkans is a priority, Nassirov reminded that the decision to choose TAP in June 2013 was made in tough competition for Nabucco.

But, as we in SOCAR always stressed and always reiterated, the Balkans were and will be the priority for the producers in Azerbaijan, in the Caspian,” he told New Europe. “Since the Balkans is the first destination immediately after Turkey in the European Union and, from the point of view of transportation costs and savings on the transportation if we compare delivery of gas to other regions of Europe, the Balkans is naturally our priority,” he added.

TAP will transport natural gas from the giant Shah Deniz II field in Azerbaijan to Europe. The approximately 870 kilometre long pipeline will connect with TANAP near the Turkish-Greek border at Kipoi, cross Greece and Albania and the Adriatic Sea, before coming ashore in Southern Italy.

Nassirov also noted that TAP and TANAP project schedules are aligned. Regarding the economic crisis in Italy, he said that although SOCAR is concerned about the crisis in every country they plan to deliver their gas. At the same time, natural gas, which is a clean form of energy, will be the priority of the EU, he added. “We don’t think any crisis or any economic development can reduce the need for energy in any country so in four-five years, the demand for natural gas in Italy will be enough,” the SOCAR Vice President said.

Regarding reports that TANAP is over budget, Nassirov said that SOCAR will be constructing the biggest part of TANAP and the financing of TANAP on behalf of SOCAR will be done by the State Oil Fund of the Republic

f Azerbaijan (SOFAZ). “Right now we’re making sure that everything that we have to conclude with the Oil Fund of Azerbaijan is in order, is optimally structured in order to have smooth financing of our share,” he said.

Meanwhile, Azerbaijan’s Foreign Minister Elmar Mammadyarov was quoted as saying on 10 February during a visit to Baghdad the Southern Gas Corridor project was open if Iraq is also interested to deliver its own natural gas. For Iraqi gas to reach Azerbaijan’s pipeline network, Turkish participation is needed.

Asked if Azerbaijan has invited countries of the Middle East to join its projects, Nassirov told New Europe that they are welcoming any producers who want to join. “As far as I understand there was some misunderstanding among the translators in Baghdad during that press conference. But, at the same time, we’re not against any of the producers who can join the pipeline and the bigger the volume and the pipeline the less transportation costs we will have to pay for our own gas,” he said. “Of course, it has to be agreed by the government of Turkey when it comes to transportation across Turkey and with the consortium of Trans Adriatic Pipeline when it comes to transportation to Italy. But we are welcoming any producers who want to join us in this project,” Nassirov added.

He also said he is optimistic that more gas from Azerbaijani fields will be pumped in to the Southern Gas Corridor in the future. “There will be many changes in the economic, market situation but, with the strength of the increase in the need for natural gas, I think more volumes of gas will be needed and whenever there are needed, there will be the production,” he said.

Turning to the agreement that SOCAR signed on 21 December 2013 in Athens for the acquisition of a 66% stake in Greece’s natural gas transmission network operator DESFA, which is still pending the approval of national and European regulatory authorities, Nassirov said SOCAR is currently working on this. “We are working both in Athens, in Brussels, and here in Baku. So far everything is fine and we hope to complete everything very soon,” he said.

Asked if the DESFA sale is a stepping stone for more SOCAR acquisitions in southeast Europe and the Balkans, Nassirov said it is “natural” since by increasing the network of gas buyers in Greece, the producers in the Caspian can increase the sales of natural gas in the countries closest to the production. “At the same time, we don’t want to have any violations of the European Union rules and regulations so currently we waiting, trying to balance everything, in order to make the optimum economic project with optimal legal framework,” he said.

Regarding the next step in Azerbaijan-EU energy co-operation, he stressed that the current focus is the Southern Gas Corridor. “It’s one thing to sign all agreements and another thing to construct the pipeline. Of course, it will not be an easy task; it will demand the combination of financial wealth, technologies, know-how, construction companies, the producers of steel and all other equipment. So I don’t think that this step that we have reached is the final one. And another step, as soon as we have completed the construction pipeline, will be other projects that will be triggered by the construction of the pipeline in order to produce more gas,” he said.

The EU has been seeking to develop its Southern Gas Corridor project that envisions supplies of gas from countries in the Caspian Basin through routes that avoid Russian territory.

Nassirov said he doesn’t view the Russian-backed South Stream gas pipeline as competition “because our volume is much smaller and we’re filling only the gap between the supply and demand. On the other hand, our pipeline is very different from the South Stream since South Stream is the new route of the gas that has been supplied to Europe for many years. In our case, it’s the new route but also a new source. So these pipelines and these projects are very different”.