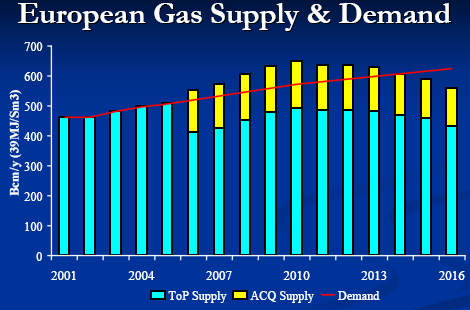 On December 17th of last year, the Shah Deniz consortium announced a final investment decision to sanction development of second phase of the Shah Deniz project, one of the world’s largest gas-condensate fields. The FID was a significant breakthrough towards the materialization of the Caspian-gas-to-Europe project and the realization the “Southern Corridor.”

The consortium had secured buyers for its gas in September of last year, with agreements to transport slightly more than 10 bcm of gas to Greek, Bulgarian, Albanian and Italian markets starting from 2019 via the dedicated Trans-Anatolian Natural Gas Pipeline (TANAP) and Trans-Adriatic Pipeline (TAP), key components of the Southern Gas Corridor.

Transiting through seven countries, involving six regulatory systems, four separate commercial projects and involving 12 companies, the costs (an estimated $45 billion USD) and complexities (legal, political, regulatory, etc.) of opening the Southern Corridor have been considerable. Gas contracts signed with nine European parties, forsee first deliveries targeted for late 2018 with sales to Georgia and Turkey; and deliveries to Europe to follow approximately a year later. Shah Deniz field condensate production is expected to increase to 120,000 barrels per day, from current levels of about 55,000 barrels per day.

When looking at overall EU consumption, the volumes of gas to be supplied by Shah Deniz are not particularly large. However, this project reaches specific gas markets of southeastern Europe that previously relied primarily on a single source supplier, leading to supply vulnerability and high import prices.

While Shah Deniz gas will flow into Italy, the Italian market should not be considered as a final destination. Italy is best positioned to transit Azerbaijani gas to neighboring countries via existing interconnectors such as to Austria via the TAG Pipeline, Switzerland via the Transitgas Pipeline or Germany and France via TENP interconnector into Belgium and the UK. For this, investment in reverse flow of these pipelines needs to be made in the short and medium term.

A final investment decision in development of bi-directoral flows is planned to be made this year in accordance with the Italy’s National Investment Strategy for its role as a transit nation and Southern Europe’s gas trading hub by 2020. This opportunity provides the Shah Deniz consortium room to maneuver by selling the gas into a wider regional market in the event if the Italian market is not be able to absorb some 8 bcm/yr.

The lingering impact of the world financial crisis and euro zone economy difficulties find that EU gas demand is at its best, currently stagnant and will continue to be so at least through this decade. However, the short-term requirements for pipeline imports will grow as a result of a projected rapid fall in domestic European gas production which will see the need for increased imports to fill the gap. The energy consumption stabilization is being expected from 2020 and beyond making the timing of the Azerbaijani gas delivery to Europe optimal. “Take or Pay” obligations in Long Terms Contracts (LTCs) will not be able to cover demand rise starting from 2020.

According to the consultancy IHS CERA, oil and coal will lose market share in the European energy mix, including in power generations in accordance with the EU strong commitment to continue the lower carbon emissions policy. Despite the EU diversifying its supply sources and that coal is strongly competing with gas in power generations because of cheaper price of the former, gas is projected to gain ground and to increase gas-fired generations after 2020. This will happen, according to the CERA projections, because of increase in the price of CO2 emissions, reaching €13,00/t by 2020. Changing the CO2 price moves coal-to-gas switching band further away as it is cost-efficient alternative to oil and coal.

However, traditional and potential suppliers of the EU market could face challenges in long term viability of their investments due to the transformative development and future export of shale oil and shale gas in the United States. Additional volumes of shale gas coming from the US can indeed reshape the dynamics of the gas world and gas supplier companies including the State Oil Company of Azerbaijan (SOCAR) and its partners must be well aware of changing dynamics of the market in order to be able to address those challenges. The challenges could occur not because of market oversupply with LNG or piped gas (the market currently is overcontracted, rather than oversupplied), but because the availability of even a small amount of US liquidity in the European hubs can affect the price formation, making the hub indexation prevailing in the LTCs.

The possible supply gap in Europe could be covered by flexible LNG coming from the US, Qatar and Australia in the future. However it is most likely that this LNG will be shipped to Asian markets because of the higher margin for supplier. US energy companies have already contracted LNG in the proportion of 20 bcm to Europe and about 80 bcm to Asian market. The gas price in Japan is $16-17 USD per Mmbtu whereas in Europe no more than $9-10 USD, making it less competitive. Such a price in Europe is most likely to remain as the price is lower than that would cause redirection of the gas supplies to other regional markets due to the commercial non-viability of the investments in the upstream and midstream projects by suppliers.

New and potential suppliers to Europe are entering unpredictable and uncertain markets in terms of demand, supply and pricing. Add to this political and geopolitical maneuverings of traditional suppliers (Russia, Norway, Qatar and others) and of consumers (using this rivalry as leverage to renegotiate the price and terms of LTCs), making this marketplace even more challenging.

It is extremely important for the Shah Deniz consortium and SOCAR in particular to be aware of the changes in the market they are targeting and to market its gas in the most economically viable manner.

Having said that, there are two possible scenarios how the SD consortium and Azerbaijan can arrange marketing of its gas:

First scenario is selling gas field by field. For instance, the first phase of the Shah Deniz project saw the establishment of a marketing company, Azerbaijan Gas Supply Company. Similarly, a separate company for Phase Two volumes, and in the future for other smaller fields in the country – Absheron, ACG Deep, Shafag-Asiman, Babek, Nakhchyvan, Zafar-Mashal, Karabakh etc., could be established. Marketing of gas from each of these fields would be realized with different terms and conditions, pricing models, volumes, etc. This model is less risky for SOCAR, as all the risks would be shared by the partners equally but not flexible in terms of efficient volume management from the perspective of the Azerbaijani government and would be overall of less benefit, particularly financially. IOCs would participate in the whole value chain and share risks.

The possible second scenario of marketing arrangement is creating an Azerbaijani gas portfolio, a kind of virtual pool, where all the country’s gas would flow into and SOCAR itself would be dealing with the marketing of gas of Azerbaijani origin (and possibly other gas in the future) as a single entity. For example, if to take gas from all the fields (producing and potential) in Azerbaijan, then the Republic of Azerbaijan represented by SOCAR may buy all the volume of gas from the IOCs at a certain delivery point, and sell the gas as a single entity, to European (and any other) buyers, i.e. SOCAR would manage the portfolio. The advantages for SOCAR and Azerbaijan of such a marketing arrangement would be:

– the company would be able to market gas in a more flexible way (including globally);

– it can mitigate seasonalities, meaning that if the buyer cannot take all the contracted volume in low demand period, SOCAR would be flexible to sell it to other customers not only in the same market but in the other region markets via swap or future SOCAR Gas Trading Companies;

– ensure Rate of Return around a year;

– IOCs can significantly lessen their risks because they would not participate in value chain operations; and

– As only one company would be responsible for suppliers, the arrangement will ensure security of supply.

However, it is crucial that in order to ensure  ensure the aforementioned advantages, the above mentioned entity is to be well aware of the market dynamics (regional/global), supply/demand and pricing forecast and projections, and developments of the energy markets in general.

As global natural gas market and the European market in particular are in a dynamic change process, it is becoming highly uncertain, unpredictable and complicated. First of all it affects supply and demand balance and the price formation of the commodity itself.

This dynamic is a challenge for suppliers both traditionally and in the future as consequences are not fully clear. In order to mitigate potential challenges, SOCAR should be able to arrange the marketing of Azerbaijani origin gas in a most economically viable way addressing those changes in the market.

The bottom line is the energy market is changing and those countries or companies that understand it and act accordingly will position themselves the best.