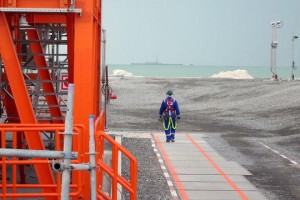 The consortium is keeping silence and the longer it lasts, the gloomier are the forecasts of the observers, writes Ak Zhayik, though media claims that the works will resume in December 2013.
In summer 2007 Eni company postponed production on the Kashagan field from 2008 till 2010, because the budget increased from $57 to $136 billion. The Kazakhstan government demanded a compensation and a bigger share for KazMunaiGas national company (KMG) in the project. Thus, on October 31, 2008 the second additional agreement to the production sharing agreement (PSA) was signed. In the agreement Kazakhstan has significantly increased its influence in the Kashagan project: a) KMG share has been increased from 8.33% to 16.81%, b) control over budget execution and schedule of the project implementation toughened (if commercial oil production does not commence till October 1, 2013, the consortium’s costs will not be refunded); c) fines for postponement of beginning of commercial oil production on Kashagan were increased from $50 million a year after 2008 to $120 million a year in 2012.
Olzhas Hudaibergenov, Director of the Centre for Macroeconomic Studies, said that about $43 billion has been spent from a total budget of the Kashagan project worth $136 billion. These are costs of the Phase 1, which will ensure extraction of about 370,000-450,000 barrels a day. The Phase-1 is not completed, but the majority of the remaining funds will be spent for the Phase-2, which envisages full development of the project and will complete in 2018-2019. The production will increase by 1 million barrels more.
“As far as profitability of the project is concerned, only representatives of the company can make comments. But profit from the extractible resources with the price of $100 per barrel can be estimated at $600 billion. I do not know how much the expenses will total,” the expert said.
Last week on November 8, 2013 Wall Street Journal published the article entitle “Production on Gigantic Oil Field Kashagan not to be resumed till next year.”
WSJ writes that the equipment for detection of leakage on the gas pipeline will be delivered no earlier than mid-November 2013. The Kashagan operator will receive recommendations of the specialists about the repair works on the pipeline only in December. The goal of the forthcoming inspection is to find out if the pipeline section should be replaced.
The gas leakage on the gas pipeline cannot be the only reason for postponement of production. Too much attention is paid to the problems related to sulfated hydrogen corrosion or pipes’ quality. This is, probably, done intentionally, because the oil pipeline consists of the same pipes, but the leakage happens only on the gas pipeline.
On November 11, 2013 Russian internet media quoted Christophe de Margery, General Director Total (one of the consortium partners), that “this is more serious, than just pipe repair” as saying at the press conference in Abu Dhabi, thus confirming serious problems on the Kashagan field.