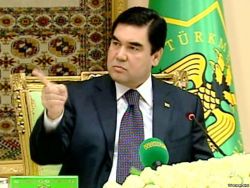 Turkmenistan President Gurbangulu Berdymohammadov has received Igor Makarov, head of Itera international group of companies, reported the Turkmenistan government on Saturday.
The situation in the Turkmenistan sector of the Caspian Sea and the perspectives of further development of mutually beneficial cooperation has been discussed at the meeting.
“The guest has informed Turkmenistan President about the work done in the past time and the state of affairs at Itera’s objects located in the Turkmenistan sector of the Caspian Sea,” reads the information.
Turkmenistan President stressed the country’s adherence to expanding and strengthening of mutually beneficial international cooperation.
“He has stressed Itera’s significant contribution into successful development of important Turkmenistan-Russian projects in various directions, including the oil and gas industry and construction,” reads the message.
Itera has been working on the Bloc No 21 in the Caspian Sea since 2009 on the basis of the production sharing agreement (PSA). In 2012 the geochemical research was completed, offshore seismic works were carried out and the perspective oil and gas zones have been determined here. Two structures have been picked out: Western Erdekli and Southern Erdekli.
The first exploration well is planned to be drilled on the bloc No 21 in 2013. Total cost of the project will be $5-6 billion, of which $300 million will fall to the investments into the geological exploration works.