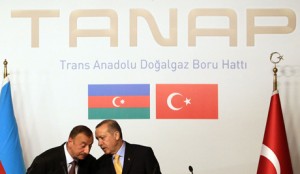 Turkish Prime Minister Recep Tayyip Erdogan gave instructions to perform all obligations to implement the Trans-Anatolian pipeline project (TANAP), which fall on the country, Turkish Resmi Gazete reported today.
It is indicated that TANAP is one of the most strategic important projects for Turkey, according to the newspaper.
The TANAP project envisages gas transportation from the Azerbaijani Shah Deniz gas field to Europe through Turkey.
The pipeline’s initial capacity is expected to reach 16 billion cubic meters a year. About six billion cubic meters will be delivered to Turkey and the rest to Europe. It could be extended up to 31 billion cubic meters per year in the future.
Currently, a 20 percent share in TANAP belongs to Turkey, while 80 percent is owned by Azerbaijan.
The TANAP partners are expected to be: SOCAR, operator (68 percent), BOTAS (20 percent) and BP (12 percent) following the purchase of TANAP interests by BOTAS and BP that are expected to be completed in 2014.
SOCAR expects to launch TANAP in 2018.