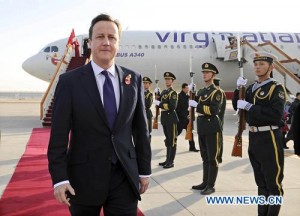 On June 30, Prime Minister of the United Kingdom David Cameron is going to pay to Kazakhstan an official visit during which ti is planned to discuss the oil and gas sector, official representative of the central communications service under the President of Kazakhstan Altay Abibullayev said at a press briefing on Monday.
“The visit of the Prime Minister of Great Britain to Kazakhstan will begin on June 30. This is the first visit of the British government to our country and in the whole region of Central Asia in the history of the bilateral relations.The visit is being held at the invitation of the President Nursultan Nazarbayev, which was made during a meeting in the framework of London Olympics last year, ” Altay Abibullayev said.
According to him, Nursultan Nazarbayev and David Cameron will visit Atyrau on June 30. The visit includes meetings with representatives of British oil and gas companies operating in the Caspian shelf. After a brief visit it is the planned to go to Astana. On Monday, July 1, it is planned to discuss a wide range of issues in the narrow and expanded formats. We will focus on security issues in Central Asia, namely the withdrawal of peacekeeping forces from Afghanistan, the issues of oil and gas and many other issues.