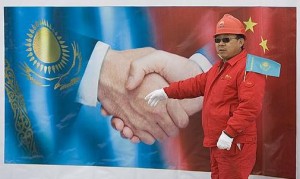 As Chinese President Xi Jinping continued his tour of Central Asia in Kazakhstan on September 7, Beijing and Astana were set to sign a raft of lucrative business deals that will further boost China’s presence in its hydrocarbon-rich neighbor’s energy sector.
Key among them was a deal giving China’s state energy company, CNPC, a stake in the super-giant Kashagan oilfield, which is about to start commercial production. The agreement, announced in July, is a coup for CNPC, which usurped India’s ONGC Videsh to acquire a stake put up for sale by Houston-based ConocoPhillips.
Under the deal, CNPC will pay approximately $5 billion for an 8.33 percent share in the consortium developing the field, which also includes Kazakhstan’s state energy company KazMunayGaz (KMG); oil majors ExxonMobil, Shell, Total, and Eni; and Japan’s INPEX.
The agreement cements China’s grip on oil and gas resources in Kazakhstan (where it already controls around a quarter of oil output) just as Kashagan is about to come on stream after years of delays. On September 7 KMG head Sauat Mynbayev said commercial production would start in three to four weeks.
Mynbayev also unveiled what Kazakhstan stands to gain: CNPC will dig deep to finance half of KMG’s investment obligations in Kashagan, and it will also build a pipeline plant and an industrial center to produce equipment for the oil industry.
Beijing has also agreed to build an oil refinery in Kazakhstan, which is critically short of refining capacity, President Nursultan Nazarbayev revealed during the visit.
Nazarbayev and Xi took part (via video link-up) in a ceremony to open part of crucial gas pipeline linking energy-rich western Kazakhstan to its densely populated south, for which China extended a $1.8 billion credit line.
During the two-day visit, 22 agreements – mostly in the energy sector but also in agriculture, transport, and construction – are being signed as China continues flexing its economic muscle in Kazakhstan. China is already the country’s largest trade partner, and Beijing and Astana are seeking to increase bilateral trade to $40 billion by 2015, against $24 billion last year.
As part of his Central Asian tour Xi has already visited Turkmenistan, where he sealed an agreementto roughly triple current Turkmen gas exports to China by 2020. From Kazakhstan he will head to Uzbekistan and Kyrgyzstan, ending his tour in Bishkek, where he is scheduled to attend a summit of the Shanghai Cooperation Organization on September 13.