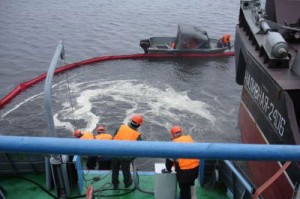 Oil production has been suspended for at least 3-4 days at Kashagan field of Kazakhstan, Kazinform reported.
“We are carrying out technological work to prepare the pipeline for opening in the site of gas leak. A special commission was created to investigate the cause of the incident. We need 3-4 days to resolve this problem and restart pumping through the pipeline,” head of Emergency Situations Ministry regional department Bolatbek Omarov said.
A gas leak was detected at Kazakh Bolashak Integrated Oil and Gas Plant in Atyrau which receives oil from Kashagan field on Sep. 24.
This incident is not the first when gas leaks at Bolashak Integrated Oil and Gas Plant. The last similar incident occurred here on August 26.
Oil production at Kashagan oil and gas field was launched on September 11.
Kashagan is a large oil and gas field in Kazakhstan located in the north of the Caspian Sea. Its geological reserves are estimated at 4.8 billion tons of oil. The total oil reserves amount to 38 billion barrels, some 10 billion out of them are recoverable reserves. There are large natural gas reserves at the Kashagan field – over one trillion cubic meters.