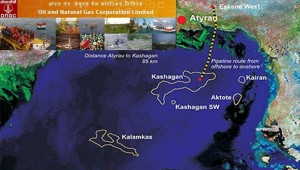 Oil production on the Kashagan field reached almost 60,000 barrels a day, said Sauat Mynbayev, President of KazMunaiGas (KMG) company.
“Every year our oil and gas industry receives significant investments to implement wide-scale production projects, one of which is Kashagan. First oil has been extracted on the field and it is already 60,000 barrels a day,” Mynbayev said at the opening of VIII Eurasian Forum KazEnerji.
“Kazakhstan jointly with its partners has been waiting for this day about 10 years and this is an important event for us. By 2025 Kazakhstan expects increase in the oil production volume up to 108 million tons a year against 79 million tons in 2012,” he added.
Oil production started on Kashagan field on September 11, 2013. The project partners are KazMunaiGas (KMG), Italian Eni, US ExxonMobil, British-Dutch Royal Dutch Shell, French Total and Japanese Inpex. Chinese National Petroleum Corporation (CNPC) bought 8.33% share in the project from KMG, reported Novosti-Kazakhstan news agency.
About 40,000 barrels of oil a day was extracted on the field on the first days, reported Russian Oil.