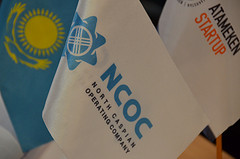 During the past five years North Caspian Operating Company (NCOC), which has been implementing the North Caspian project, has invested $27 billion into the field development, said Bazarbay Nurabayev, chairman of the Kazakhstan Committee of Geology under the Ministry of Industry and New Technologies.
Last year the investments totaled $2.2 billion, he said at the international conference “Caspian Shelf Development” in Atyrau on Wednesday.
The costs for geological exploration totaled over $1 billion, last year they compensated to the amount of $120 million.
According to the production sharing agreement (PSA), the contract area of the drilling works of the consortium includes four oil-bearing fields: Kashagan, Kalamkas, Aktoty and Kayran. These fields consist of 11 offshore blocs, which occupy the area of about 5,600 sq.km.
By the end of 2009 all stages of works were carried out on the onshore and offshore sections on Kashagan to commence production at the end of 2012. However, the term of Kashagan development is postponed again. Earlier it was planned to start commercial production on the field in December 2012-June 2013, but recently Kazakhstan Minister of Oil and Gas said that it should start no later than September 2013, because the equipment must be tested.
The Phase 1 of the project envisages production of about 370,000 barrels of oil a day with possible increase up to 450,000 barrels. The Phase 2 envisages increase in production up to 375,000 barrels a day within at least three coming years. Agip is in charge of the offshore projects, while Shell and Exxon – in charge of ground and drilling projects.
Kazakhstan pins great hopes on development of this field. According to the forecasts of the European Bank for Reconstruction and Development (EBRD), in 2013 GDP growth in Kazakhstan will constitute 6%, because of launching of a new phase of the Kashagan project, reported http://oilnews.kz.
* NCOC shareholders are Agip Caspian Sea B.V. (16.81%), KMG Kashagan B.V. (16.81%), ConocoPhillips North Caspian Ltd. (8.4%), ExxonMobil Kazakhstan Inc. (16.81%), Inpex North Caspian Sea Ltd. (7.56%), Shell Kazakhstan Development B.V. (16.81%) and Total EP Kazakhstan (16,81%). Meanwhile, ConocoPhilips announced that it is going to leave the project.