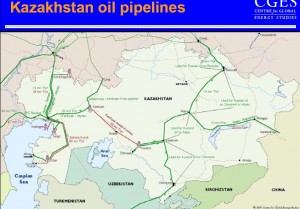 A consortium in Kazakhstan led by U.S. supermajor Chevron said it set a production record in the country’s western Tengiz oil field and last week, China said it was piping in more oil from Kazakhstan than ever before. Even with its giant Kashagan field down, the prospects look up for the Central Asian country.

Tim Miller, director-general of the consortium known also as TCO, said Monday from Astana, the nation’s capital, oil production from Tengiz would help Kazakhstan reach its 2020 production target of at least 733 million barrels. Chevron describes Tengiz as a “super giant” and the field aloneaccounts for nearly 30 percent of the country’s total production.

The Organization of Petroleum Exporting Countries said in its market report for January that Kazakhstan carried its own against the otherwise disappointing 2013 for oil producers in the former Soviet Union. Russian, meanwhile, will shift further away from the European Union by sending its crude oil to China through the Kazakh transit network during the first quarter of 2014. OPEC said Kazakhstan’s oil supply increased by notably from the previous year to average 1.64 million bpd in 2013.

For investors, that shift from Beijing reflects an overall realignment of energy market centers to Asia. TCO said its $7.4 billion expansion project for Tengiz should help field production increase steadily throughout the course of the decade.

Chevron is also assisting KazMunayGas with developments at the Karachaganak oil field in Kazakhstan, which last year averaged 213,000 bpd, making it one of the largest oil fields in the world. A $5.4 billion project outlined in 2010 calls for the expansion of a 900-mile Caspian oil pipeline to 1.4 million bpd from its current capacity of 730,000 bpd for a Black Sea coast terminal.

The biggest of Kazakhstan’s super giants, Kashagan, remains offline. OPEC said last year was supposed to be Kazkhstan’s breakout year, but pipeline issues at the 13 billion barrel field kept it out of a limelight stolen when Azerbaijan made transit decisions for its Shah Deniz gas field in the Caspian Sea. All told, production from Kashagan was online for less than two months last year. The North Caspian Operating Co., the consortium managing the field, said the date of restart depends on the extent of the necessary repairs.  When it does return, as much as 1.5 million bpd could come from the project, leaving Azerbaijan and possibly the best U.S. shale has to offer in its wake.