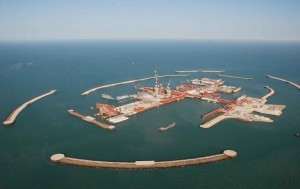 The results of examination samples of steel from the pipelines on Kashagan field in Kazakhstan performed by the British TWI and other specialized laboratories will be available at the end of January-early February, reads the statement of NCOC consortium developing the field released on Wednesday.
The statement reads that the check of the gas pipeline from the island D to the oil and gas installation Bolashak with the so-called diagnostic device is completed and the results data will be interpreted.
The similar works are carried out now on the oil pipeline from the island D to Bolashak with the same device and their results will be available after one month.
According to the statement, during check-up of the pipeline with the diagnostic device on January 11, 2014 a presence of a small amount of diesel fuel was detected on the ground section of the oil pipeline close to the Bolashak installation. The ground sample was taken, the pipeline section was isolated and the seepage of fuel from the weld has been confirmed.
NCOC also reported that the term of resumption of production depends of the volume of required repair works, which could be evaluated only as soon as results of study of the reasons of bursting done by TWI and results of the analysis using the diagnostic device are available.
“North Caspian consortium adheres to strict observation of requirements of safe production operation ensuring their correspondence to the advanced practice of oil and gas fields operation and legislation,” reads the statement.