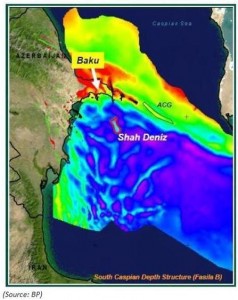 BP and SOCAR (the State Oil Company of Azerbaijan) are working on the agreement on developing gas resources in the deeper horizons of Azeri-Chirag-Guneshli block of oil and gas fields in the Azerbaijani sector of the Caspian Sea, Greg Riley, BP’s Director of Eurasian Exploration, said in his interview with Azernews newspaper.

“Our knowledge of the field has confirmed presence of large non-associated gas resources in the deeper horizons of ACG that can be developed in support of Azerbaijan’s plans to expand its new supplier role,” Riley stressed.

Riley went on to say that BP partly reinjects ACG associated gas to maintain pressure in the reservoir and the remaining part is delivered to the national grid system for domestic use.

Riley pointed out that with the right production plans in place and the right technologies ACG can go on for decades to benefit Azerbaijan, our partners and the region as a world-class resource.

The contract on Azeri-Chirag-Guneshli was signed in 1994.

As SOCAR head Rovnag Abdullayev said previously, the agreement for deep-lying gas development in the ACG will be concluded on the basis of a new risk service agreement. The first Azeri-Chirag-Guneshli contract was a production sharing agreement (PSA). A new type of contract will allow an increase in the volume of SOCAR’s of energy resources.

International organizations evaluate oil and gas companies in terms of their reserves. Finalizing new types of contracts will allow SOCAR to increase its activity

The deep-lying gas reserves in Azeri-Chirag-Guneshli are estimated at 300 billion cubic meters.