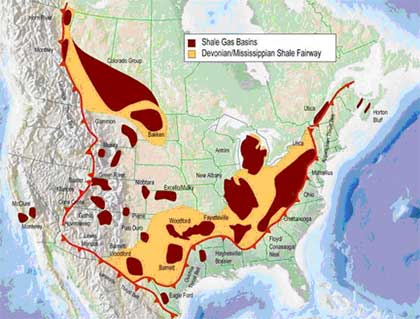 The Canadian National Energy Council jointly with the regulating agencies of Alberta and British Columbia have submitted the first research of evaluation of oil and gas resources of the shale formation Montney.
According to the report, the resources total 12,719 billion cub.m. of tank natural gas, 2,308 million cub.m. of tank liquefied natural gas (gas condensate) and 179,000,000 cub.m. (1,125 million barrels) of separator oil.
The above-mentioned gas resources could satisfy Canada’s consumption during 145 years and exceed the resources of the US Marcellus and Haynesville fields.
In 2012 gas production on Montney totaled 1.7 billion cub.feet a day – about 12% of total production in Canada of 13.9 billion cub.feet a day, reported http://slanceviy-glas.livejournal.com.