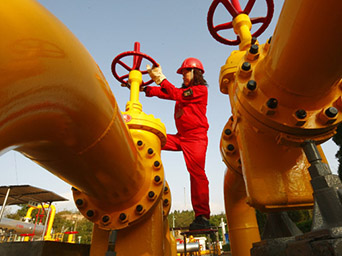 It is impossible to understand the outlook for energy prices – internationally or at the domestic level – without looking carefully at what is happening in the gas market. The simplistic assumption is that because demand is rising, prices must also increase inexorably. This assumption underpins a lot of official forecasts and the business plans of some optimistic producers. The reality is much more complicated. The emergence of a spot market suggests that there is a strong chance of prices falling over the next decade.
Historically there have been three regional gas markets – in North America, in Europe and more recently in Asia. In the first two gas has mainly been supplied by pipelines and prices have been set through long-term contracts tied to the price of oil. In Asia the market has been supplied by liquefied natural gas imports.
Over the past decade this orderly market in which fields were not developed unless the gas was pre-sold has been disrupted, first by the growth of LNG trading which can take supplies anywhere in the world and more recently by the development of shale gas in the US which has cut imports and raised the prospect of American exports. Because LNG involves high upfront capital expenditure projects have predominantly only gone ahead when long-term sales contracts for the gas have been signed, usually still tied to oil.
But now this old order is breaking down. A spot market is emerging which is progressively forcing gas to gas competition for the first time. The link to oil prices is being broken, and despite rising demand in Asia the market is turning in favour of buyers rather than the producers.
Three factors are driving the change. First supplies of gas are proving to be plentiful. There have been a series of new discoveries of conventional natural gas off east Africa and in the eastern Mediterranean. Supplies from the Caspian and central Asia are gradually being brought to market. LNG trade grows year by year, opening new options for utilities and other gas users across the world.
Second on the demand side gas is being squeezed out of the key market for power generation in Europe. Undercut by coal exports from the US, and limited by the mandated growth of renewables especially in Germany and the UK, gas is seeing its market share shrink.
Third there is technology. Shell, for instance, have recently announced that they expect to see a new generation of floating LNG facilities to be built which will be capable of tapping the reserves of gas (about 800tn cubic feet according to Shell) known to exist in water of more than 200 metres.
Of course demand in Asia continues to rise. But there consumers tired of high price differentials are beginning to fight back. The Japanese and Indian governments are talking about co-ordinating their approach as buyers. Even if the Chinese remain outside the process the Asian buyers could force a change in pricing mechanisms – linking substantive long-term deals to prices led by the Henry Hub trading market in the US.
In a buyer’s market prices tend to fall. In an increasing open market with multiple buyers and sellers they also tend to be set through direct competition for supplies with prices determined by trade. The shift is just beginning but the trend is clear.
The impact will be felt by all those involved. Consumers should benefit so long as spot markets do not overshoot and force out marginal production. To limit volatility some importing nations and utilities are likely to agree floor prices in return for guaranteed supplies. Producers will be forced to think again and to drop the assumption of ever-rising prices. From Arctic Russia to Australia expensive LNG projects are on hold with several likely to be postponed or abandoned.
The biggest challenge is for those whose existing contracts are now in jeopardy. In Germany the emergence of market-based pricing under which prices are set by short-term competition rather than long-term contracts is a direct challenge to suppliers such as Gazprom. Other major producers including the Qataris who have come to rely on gas for their export earnings and national revenue will have to adapt to the new order. Their hope must be that lower prices along with the increased confidence in supply security which comes from the development of diverse supplies will encourage more and more consumers to switch to gas. Effective markets shape both supply and demand, and the emergence of a robust spot market which sets prices for all reinforces the view that gas will be the dominant energy business of the first half of the 21st century – reported http://blogs.ft.com.