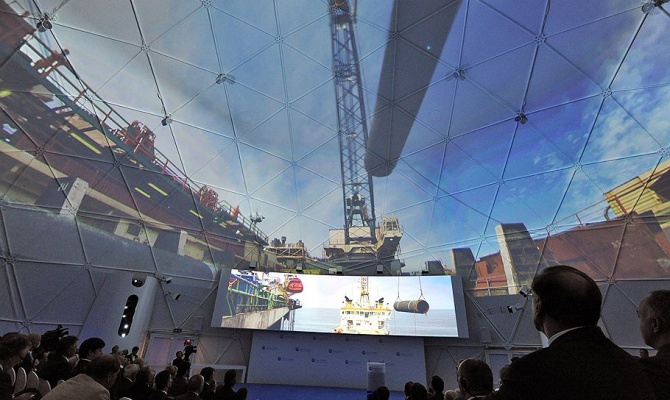 The issue of Nabucco gas pipeline is still an interesting one and there are several key factors ensuring that the project remains on the table, political risk analyst at Menas Association in London, focusing on Caspian energy and political issues, Alexander Jackson said.
“The Southern Gas Corridor always intended to be developed in several stages, and although Nabucco was not chosen first of all, there is no reason why it cannot be built one day,” Jackson told Trend via e-mail.
In October the European Commission intends to publish an EU-wide list of ‘Projects of Common Interests’ (PCI). Earlier Reuters with the reference to EU diplomats reported that Nabucco West along with the Trans Adriatic Pipeline (TAP) project is included on the list of PCI.
In late June the consortium of the Azerbaijani Shah Deniz field development selected the Trans Adriatic Pipeline (TAP) as the gas transportation route to the European markets. Nabucco West was the second pipeline that competed for the transportation of Azerbaijani gas to Europe.
Jackson believes that although the decision to choose TAP was based on commercial logic, and all the companies in the Shah Deniz consortium supported it, there were also priorities which TAP did not meet as well as Nabucco.
According to the expert, from political view the route through Central and Eastern Europe to supply the states of the Balkans, which are dependent on Russian gas, is in interest of both Azerbaijan and the EU.
“Although TAP insists that it can supply gas to the Balkans through new interconnectors, the recent sales contracts signed by the Shah Deniz consortium mean that more than 80 percent of the gas will go to Italy and nearby markets. The eastern Balkans will only get 1 billion cubic metres per year, that is 10 percent of the total, through a contract with Bulgargaz,” Jackson said.
“So the demand is certainly in place, as well as the political will on behalf of the supplier and transit states Turkey and Azerbaijan,” Jackson added.
He said that the supply is also expected to be present through new gas fields in Azerbaijan, supplies in northern Iraq, and perhaps developments elsewhere (eastern Mediterranean, Turkmenistan, Black Sea, and so on).
TAP’s maximum expected capacity is 20 billion cubic meters per year, but potential exports from the new supplies are higher than this, expert stressed.
At the same time Jackson told that Russia’s South Stream project may indeed reduce the incentive for Nabucco.
However, according to Jackson, South Stream conflicts with the EU’s Third Energy Package and there is scepticism about the seriousness of Russia on the project. “Most of the countries in the region do not want to remain reliant on Russian gas and are keen on an alternative gas supply,” he added.
“Therefore all the key factors ensure that Nabucco remains on the table,” Jackson said.
“Everything depends on timing: does the timing of the supply match the timing of the demand? How quickly can alternative sections of the Southern Corridor develop and how does this compare to South Stream,” Jackson added.
In early September Azerbaijani Minister of Industry and Energy Natig Aliyev said that the Nabucco West gas pipeline project has not lost its significance and can still be implemented. “These two projects, Nabucco West and the Trans-Adriatic gas pipeline have different goals and the choice of TAP does not exclude implementation of Nabucco,” Aliyev said.
According to the EU Energy Commissioner Guenther Oettinger, both Nabucco West and TAP projects are needed in the medium term.