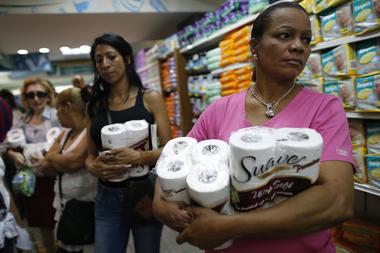 Venezuela’s squandering of its oil wealth has left its economy in tatters while leaders merely blame the US. As more resource-rich nations learn to dodge the ‘oil curse,’ Venezuela can do the same.

Among the few dozen nations blessed with abundant resources, Venezuela has become a pitiful paragon of what not to do with massive natural wealth. Despite sitting on the world’s largest oil reserves, its economy is falling apart fast. Basic goods are scarce, inflation is raging, and blackouts are common. The lines of people seeking visas to flee are long.
Rather than change and invest the nation’s petro-dollars for the day when the oil runs out, President Nicolás Maduro has resorted to an old trick of Hugo Chávez, his late predecessor. He has concocted an enemy to deflect public attention from government corruption and mismanagement. On Monday, he expelled three American diplomats, claiming they had plotted to sabotage the economy.
One reason more Venezuelans now see through such smoke screens is the fact that many other nations with natural wealth are finding ways to avoid what economists call the “resource curse.” This is the misuse of temporary windfalls from petroleum or other mineral bonanzas, similar to the common phenomenon of lottery winners who later go bankrupt.
The “curse,” it turns out, is only as real as a country chooses to make it. Places such as Norway, Botswana,Alaska, Chile, and Canada have adopted a few basic principles to stretch out and maximize the take on their resources.

First, they are transparent about where the money flows, which requires a certain commitment to democracy. Second, they distribute it fairly, especially to future generations, rather than squander it by secretly funneling it to a well-connected elite. And third, they create more wealth by investing the money in entrepreneurs, education, and infrastructure.
“Just as the oil curse had a beginning, it could also have an end,” says Michael Ross, author of “The Oil Curse: How Petroleum Wealth Shapes the Development of Nations.”
As more nations tap hard-to-reach oil and gas deposits, especially in shale formations, they are learning how best to recycle their resource profits The advice often comes from private activist groups and the International Monetary Fund. But Norway is one of the best models of how to elude the “curse.”
After the Scandinavian country began to export offshore oil in the 1970s, it set up a government fund – now $700 billion – and invested in foreign stocks, bonds, and real estate. The country spends only the returns on the investments, using the money to build up its private non-oil economy and boosting employment for women by providing generous maternity leave.
In Alaska, a portion of the oil wealth is given to residents in annual checks. This allows citizens to decide for themselves how best to boost the economy.

RELATED: Can Latin America avoid a return to its populist past?

Most nations with outsized natural wealth, especially in the Middle East, are not democratic. Economists debate whether it is the resource wealth or each nation’s history which accounts for that. In Russia, oil wealth has helped erode democracy. In Mexico and Nigeria, leaders are trying to end the damaging effects of oil wealth on each nation’s democracy.
Wealth need not have a corrosive effect if more countries adopt basic practices such as openness, prudent saving, and political freedom. And Venezuela wouldn’t need to create a bogeyman out of the United States if it began to see that an oil curse is something of one’s own making.